Join us for a day of double-track railway photography at the Great Central Railway featuring Ivatt 2MT Class 2-6-2T No.41312 in British Railways black livery which is paying a short working visit to the Leicestershire line.

No.41312 was built at Crewe in 1952 and allocated new to Faversham (73E) in May of that year. A brief spell from May 1959 was spent at Ashford (73F) before the locomotive moved to Barnstaple Junction in early 1960. It worked on the Torrington branch and on Ilfracombe to Exeter services. March 1963 saw No.41312 move to Brighton and the following year to Bournemouth for use on the Lymington and Swanage branches; the loco worked the last steam-hauled train on the Lymington branch in April 1967. For the final three months of its British Railways career, 41312 was based at Nine Elms and used on shunting duties around Waterloo Station. Withdrawn just a week before the very end of Southern Region steam in July 1967, the 2MT was sent to Woodham Brothers Scrapyard at Barry in South Wales, arriving in 1968. Purchased for preservation initially by the Caerphilly Railway Society in August 1974, in 1995 the engine was privately purchased by John Jones and returned to steam for the first time in preservation in 1998 at the Mid-Hants Railway’s Ropley Works. No.41312 returned to revenue-earning service on New Year’s Day in 1999 and for a period was main line certified for use on the MHR’s Daylight Railtours. The Mid-Hants Railway purchased the locomotive in 2019. No.41312 is one of four members of the class to have been preserved.

Our day will start at Loughborough Station at 09.30 (please arrive by 09.00 for our routine but most important safety briefing). We will work our way along the line taking in many of the better locations including Beeches Road Bridge, in and around Quorn, Rabbit Bridge, Swithland, then later the approach to Quorn and Kinchley Lane. We will travel on the train for this event. The Butler Henderson cafe at Quorn should be open for food at lunchtime.

The combination of No.41312 in lined British Railways black livery and two maroon-liveried suburban coaches should look excellent and we look forward to seeing many of you at the Great Central Railway in Autumn 2022 for another enjoyable day of steam railway photography.


Please note: Both TimeLine Events and the Great Central Railway will endeavour to honour the quoted prices. However, should there be a major rise in coal costs between now and Autumn 2022 we reserve the right to adjust the price should this become necessary. We hope this will not be the case and any increase will be kept to an absolute minimum.
Images for illustration purposes only. 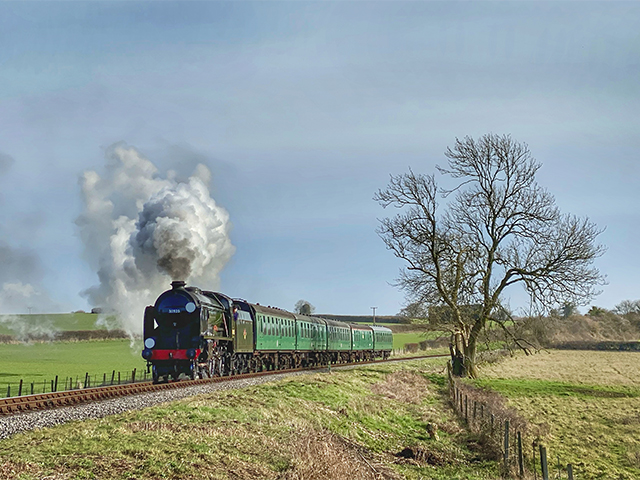 A day of steam photography featuring No.30925 Cheltenham on Southern vans and green passenger stock