We are delighted to be returning to the Paignton & Dartmouth Steam Railway in Devon for two days of photography featuring Western Region heavy freight 2-8-0T No.4277 hauling the line’s engineering train. The locomotive is in British Railways black livery carrying the early crest and should look very much the part paired with freight stock.

The Paignton & Dartmouth line is situated on an idyllic stretch of coastline with a number of fine photographic locations along its seven-mile route. Opportunities using non-passenger rolling stock are at a premium on this busy line, and we are looking forward to seeing this combination climbing the gradients of this picturesque former Western Region branch. Our only previous attempt at this train formation was met with leaden skies and horizontal rain, so let’s hope for clear skies to showcase this unusual working.

No.4277 was built at Swindon in 1920. Much of its time was spent working out of Welsh sheds including Aberbeeg, from where withdrawal came in 1964. Like many similar locos, 4277 made its way to Barry to join the scrap line at Woodham Brothers before being privately purchased and restored to working order in the 1990s. The PDSR purchased the loco in 2008 and, since arriving in Devon, No.4277 has carried the name Hercules which will not be carried during our two days of charters! It has recently returned from a full overhaul, re-entering traffic in Summer 2022.

Our day will start from Paignton PDSR Station and we will do our best to arrange an early morning opening of the cafe opposite the station on both days for breakfast rolls and hot drinks, an arrangement that has worked extremely well previously; we might even get lunch, too! As we have a goods train and are therefore not able to travel by train, we will be moving between locations by road. We will ensure group travel so that we don’t have to use our cars and seek out often scarce parking spaces, so much of any possible hassle should be taken out of the day.

It is a little while since we visited Paignton and we hope you will join us for what promises to be an excellent and rare opportunity of seeing the Railway’s goods train in action. 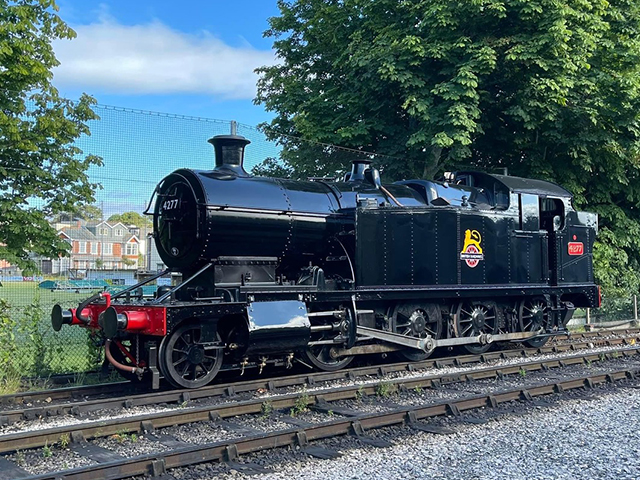