We are delighted to offer a full day of steam photography using No.73082 Camelot at a time of year that potentially offers stunning lighting conditions during the locomotive’s short working visit to Leicestershire from its home base of the Bluebell Railway in West Sussex.

Our day will start with the locomotive facing north (chimney first into Loughborough) which will give us potentially excellent backlit lighting opportunities as the sun rises over a frosty Winter landscape. We will be using the Railway’s superb 1950s mixed goods set for these early pictures and up until lunchtime, when No.73082 will be turned at Quorn prior to our afternoon session. We will have lunch at the Butler Henderson Cafe at Quorn Station while the 5MT is serviced, and then join the train of carmine and cream coaching stock for the remainder of the afternoon until dusk.

No.73082 is a Riddles-designed Class 5MT 4-6-0 built for British Railways at Derby in 1955 and was allocated to Stewarts Lane Depot on the Southern Region for working services out of London (Victoria) to East Kent. In 1959, with East Kent electrification reducing the need for steam, 73082 was reallocated to Nine Elms Depot to work from London (Waterloo) to Bournemouth, Salisbury and, very occasionally, on the Somerset & Dorset. It acquired its name along with other members of the class when twenty Southern ‘King Arthur’ Class 4-6-0s were withdrawn and their names transferred onto British Railways Standard locos. In 1965, the engine was shedded at Guildford by which time electrification was spreading across the Southern Region and steam was gradually being phased out. Withdrawal came in 1966 and, like many others, 73082 joined the locos sent for scrap at Barry in South Wales. Woodham Brothers did not cut up the 5MT and the Camelot Locomotive Society was formed in 1974 to rescue 73082, with purchase and move to the Bluebell Railway completed in 1979; it was in 1995 that the Standard first steamed in preservation and entered traffic on the Bluebell Railway.

We would like to thank the locomotive’s owning group, the 73082 Camelot Locomotive Society, and the host Great Central Railway for facilitating this event. It is rare that 73082 appears on double track, so this is an unusual opportunity with the locomotive paired with two sets of stock that will suit it perfectly. We hope you will want to join us at the Great Central Railway and look forward to seeing you in Leicestershire for a day of potentially spectacular late-January steam action. 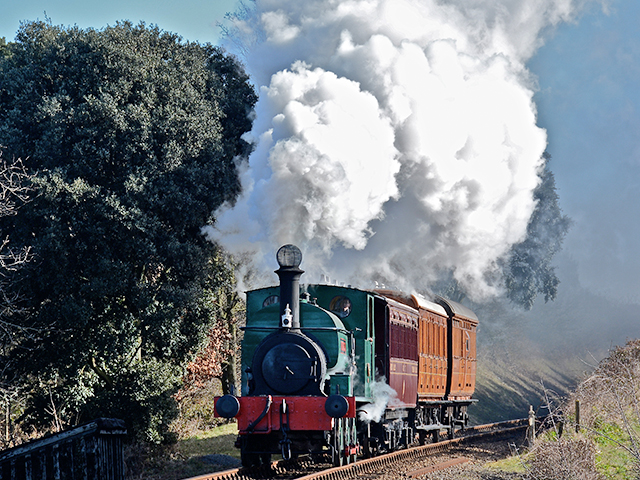