Join us for a fantastic day of re-enacting at Avoncroft Museum of Historic Buildings at Stoke Heath near Bromsgrove in Worcestershire.

On this day our recreations will primarily be from the 1930s and 1940s (civilian) period and there is plenty of scope across the site for cameo scenes. The Avoncroft Museum was established in 1967 to preserve some of the historic buildings that were at that time being demolished to make way for modern development and were in danger of being lost with no physical record of particular types of architecture. Five years earlier, in 1962, a local campaign had been started to save a medieval timber frame town house threatened with demolition in Bromsgrove. This building became the first to be rescued, dismantled and reconstructed at Avoncroft Museum, where thirty structures spanning 700 years of history have been rescued and rebuilt on site. These include the famous Danzey Green Windmill dating from the 1830s, the Little Malvern Tollhouse of 1822 and the Nailer’s Cottage of 1840s vintage. Avoncroft Museum is also home to the National Telephone Box Collection. The Museum’s buildings are many and varied covering a number of historical periods and we will obviously be using those that best act as a backdrop for our re-enactments during this event. We will make full use of the outdoor areas of the Museum and also access the interiors of those buildings that most closely match the period which we seek to recreate.

The Museum is easily accessed via either Junction Four (if approaching from the North) or Junction Five (if approaching from the South) of the M5 motorway. The postal code, for those using satellite navigation, is B60 4JR and the Museum is circa three miles from each motorway exit. There is ample free parking at the Museum. We expect to meet at 09.30 for an 09.45 start and to run through the day until 16.30 with a break for lunch to give photographers and re-enactors a breather!
This is a pleasant, relaxed site to visit and we have some high quality re-enactors lined up for you. We hope you will wish you to join us for what promises to be an excellent day of period re-enacting against the backdrop of some truly historic buildings. 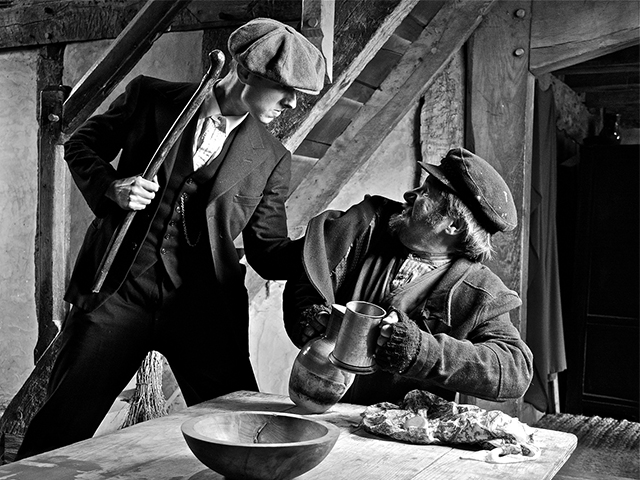 An evening of 1940's re-enactment at the Milestones Museum