We are pleased to offer you the first opportunity to photograph Ivatt '2MT' Class 2-6-0 No.46521 in a mainline environment on double track facing north. The locomotive will be paired with the newly restored Suburban Brake Coaches that are in BR Red Livery.

Deep winter can be one of the best times of year to photograph Steam so we will make the best use of the low winter light by being out on the line all day, visiting many of the regular locations, as well as possibly some single track sections. We will start at Rabbit Bridge where we will be place for Sunrise in the hope of catching the train in one of the most authentic locations on the line for a northbound working.

No.46521 was built at Swindon in 1953 and initially allocated to Oswestry Depot. The Ivatt was one of 128 members of the class constructed and is one of seven to survive into preservation. No.46521 spent almost all of its working life in Wales, outshopped in green livery, being closely associated with the 'Cambrian' routes of the Western Region. After Oswestry, 46521 was shedded at Brecon and latterly (from 1963) at Machynlleth. In August 1963, the loco was used on Royal Train duties for positioning moves and train heating. Earlier that year, 46521 had been sent to the London Midland Region's Crewe Works for heavy maintenance, the Midland having taken on responsibility for the engine's maintenance in 1962. Withdrawal came in October 1966, the locomotive reaching Woodham Brothers' scrap yard in March 1967.

Rescued for preservation by Charles Newton in 1969, No.46521 was returned to steam on the Severn Valley Railway in 1974, where it operated successfully alongside classmate 46443 until 2000, appearing in the mid-1990s as the branch line engine Blossom in the BBC TV series Oh Doctor Beeching. Earlier in the 1990s, the Ivatt also made a brief return to the national network hauling the 'Capital Envoy' specials on British Rail metals. The loco moved to the Great Central Railway in 2001 following the expiry of its second ten-year boiler certificate in preservation; 46521 returned to steam at the GCR ten years later in 2011.

Our charter will start at Loughborough at 07.30 in the morning and run until sunset. Apart from a short break to service the loco we will be out on the line all day with sole occupation.

We look forward to seeing many of you at the Great Central Railway in January for a reminder of Western Region locals in the 1950s and early 1960s. 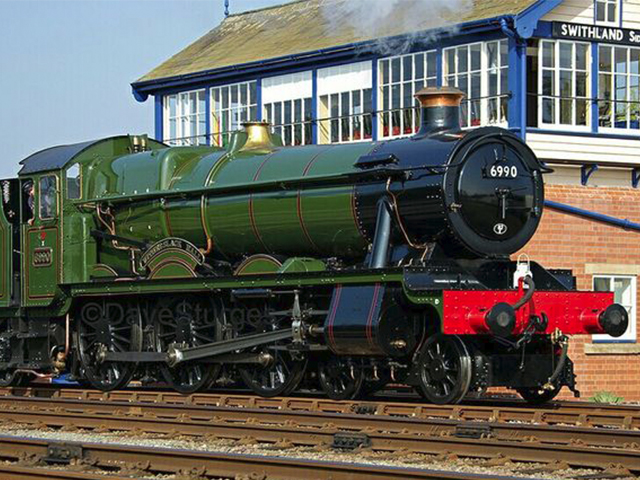 Passing Shots on the Great Central Railway with a BR(W) theme.